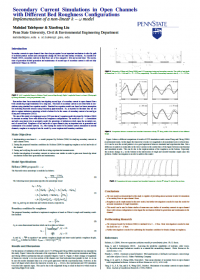 Secondary current in open channels have been long recognized as an important mechanism to alter the path of sediment particle motion and consequently change the river and land surface evolution. Researchers have identified two different kinds of secondary current: the first kind due to curvature in a river bend and the second kind due to turbulence anisotropy. This paper deals with the second kind in a straight open channel. Despite the continuous research effort, the mechanism is still not fully understood. One of the intriguing features is that in natural channels, the co-evolution of the river and the bed, and more importantly the differential transport of sediment mixture, often result in the the non-homogeneous distribution of roughness on the channel bottom. The mutual influence of secondary current and bed roughness is of great interest to geologists and hydraulic engineering researchers. This paper aims to map the details of the flow field using a computational model equipped with a new nonlinear $k-\omega$ model. This nonlinear model is designed to take into account the anisotropy of turbulence and since it is written in $k-\omega$ formulation, it can be integrated all the way to the wall. Low-Reynolds number (LRN) form of the model also makes it unnecessary to use a wall-function, which breaks down in many cases. The roughness effect on the turbulence is through a simple relationship for the $\omega$ boundary condition. The aim of this work is first to test the model in the context of riverine flows, and second to calibrate the model so it can be used with roughness patches. It is found the new turbulence model is capable to generate and maintain the secondary current. This paper will present the calibration result against classic experimental data. The results suggest the model is somewhat sensitive to the boundary condition on the bottom and less so to the free surface. As speculated in the many theories and observed in experiments, the simulation confirms that the secondary current above a non-homogeneous bed is mainly driven by the current generation near the bed and then a cellular motion is induced by the virtue of continuity. In other words, the anisotropy of turbulence near the free surface only plays a secondary role. The calibrated simulation results are further used for more detailed analysis on the momentum and vorticity budget.