Including fine-grained sediment processes within numerical representations of a partially-mixed estuary, the York River, Virginia 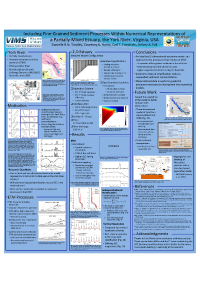 The Community Sediment Transport Modeling System (CSTMS) is being used to represent conditions in the York River, Virginia, a partially-mixed tidal tributary of Chesapeake Bay. Our modeling approach includes both an idealized two-dimensional longitudinal representation of the estuary, and a more realistic full three-dimensional model of the York River. Both have been implemented using versions of the Regional Ocean Modeling System (ROMS). Our modeling efforts have been motivated by a rich set of observation data from in-situ measurements made by acoustic Doppler velocimeters (ADVs), a pulse coherent acoustic Doppler profiler (PC-ADP), a laser in-situ scattering and transmissometry (LISST), and a particle imaging camera system (PICS). Additionally, water column and bed inventories of Beryllium-7 will be used to constrain the three-dimensional model parameters.

Within the full three-dimensional model, hydrologic conditions, physical forcing, and sediment characteristics are being used to examine spatial and temporal changes in sediment dynamics in the York River estuary. This version of the CSTMS accounts for suspended transport, erosion, deposition and cohesive processes via consolidation and swelling of the sediment bed, which change the critical shear stress of the seafloor in response to sedimentation. Adjustments to the open boundary conditions for salinity and wind forcing produced model estimates for the summer 2007 that show good agreement with observed sediment concentration, bed stress and other hydrological parameters. We analyzed the sensitivity of calculations of the total eroded mass to the bed consolidation time scale and the critical shear stress for erosion. Further analysis showed model sensitivities to the swelling time scale and the user defined initial and equilibrium critical shear stress profiles.

The idealized two-dimensional model is being developed within the Coupled Ocean-Atmosphere-Waves-Sediment Transport (COAWST) version of the ROMS model family. The idealized model represents a longitudinal section of a partially-mixed estuary, accounting for a freshwater source, tides, and estuarine circulation, but neglecting across-channel variations. The impact of sediment-induced stratification and the flocculation of cohesive sediments on depositional patterns will be evaluated through the addition of these two processes into the two-dimensional model. This simplified model will be used as a platform for implementing code to account for sediment-induced stratification and flocculation processes within the CSTMS framework, including our three-dimensional CSTMS model of the York River estuary.