Advances in sediment transport modeling offshore of a fluvial source 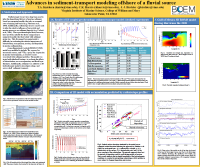 The Community Sediment Transport Modeling System (CSTMS) has been applied to several continental shelf environments, including areas offshore of large river sources. However, all of these sediment transport model studies have represented sediment as non-reactive tracers, resulting in a disconnection between model calculations and field observations which may rely on geochronological tracers. Additionally, model estimates of sediment transport within the freshwater plume, or resuspended on the sediment bed have not been linked to cross-shelf transport mechanisms that carry material to the deep sea. Here we make advances on both fronts by developing a numerical model for suspended transport that will be linked to models of down-slope transport, and furthermore develop the ability to directly estimate transport and decay of particle reactive radionuclides.

To better understand transport pathways and depositional patterns in the Gulf of Mexico, a three-dimensional coupled hydrodynamic-sediment transport model has been developed within the Regional Ocean Modeling System (ROMS). The modeled period, October 2007 through September 2008, included two hurricanes and a period of high river discharge. Model estimates of sediment dispersal revealed sensitivities to settling velocities and critical bed shear stresses. Transport and deposition of terrestrial sediments were limited along-shelf, such that the model showed little comingling of material from the Mississippi, Atchafalaya, and Mobile Rivers during the yearlong model run. Across-shelf suspended sediment transport occurred primarily during periods of elevated wave heights, coincident with storms.

The relative influences of terrestrial and marine processes on sediments in coastal marine environments can be inferred from the distribution of short-lived radioisotopes, but these have not previously been represented within models. A one-dimensional (vertical) sediment transport model was modified to include Be-7, a proxy for terrestrial sources, and Th-234, a proxy for suspension in marine environments, as reactive tracers associated with sediment particles. Experimental results explored the sensitivity of vertical radioisotope profiles to initial deposit thickness, bioturbation rates, resuspension depths, and initial radioisotope inventories. This approach will facilitate better comparisons between modeled and observed sediment transport and depositional data.