InSAR measurements of compaction and subsidence in the Ganges-Brahmaputra Delta, Bangladesh 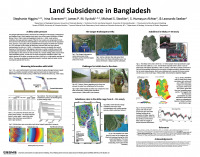 The Ganges-Brahmaputra Delta (GBD) is the world's largest river delta, and is home to more than 150 million people. This study reconstructs subsidence rates in the eastern portion of the Ganges-Brahmaputra Delta (GBD), Bangladesh, covering more than 10,000 km2 at a high spatial resolution of 100 m. The map was produced using Interferometric Synthetic Aperture Radar (InSAR) covering the period 2007 to 2011. Eighteen ALOS (Advanced Land Observing Satellite) PALSAR (Phased-Array L-band SAR) scenes were used to generate 30 interferograms calibrated with GPS. Interferograms were stacked to yield average subsidence rates over the study period. Small Baseline Subset (SBAS)-InSAR was then applied to validate the results against an additional GPS record from Dhaka, Bangladesh. Land subsidence of 0 to > 10 mm/y is seen in Dhaka, likely related to groundwater abstraction with rates corresponding to local variations in shallow subsurface sediment properties. Outside of the city, rates vary from 0 to > 18 mm/y, with the lowest rates appearing primarily in Pleistocene Madhupur Clay and the highest rates in Holocene organic-rich muds. Results demonstrate that subsidence in this delta is primarily controlled by local stratigraphy, with rates varying by more than an order of magnitude depending on lithology. The ability of L-band InSAR to differentiate between stratigraphic units in this humid, vegetated subtropical river delta demonstrates the power of interferometry as a tool for studying the subsurface in deltaic environments. 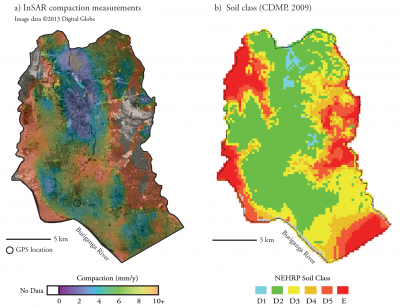 (a) InSAR-derived average annual subsidence rates in the city
of Dhaka, underlain by a satellite image of the city.
(b) NEHRP soil class in the city of Dhaka, from CDMP [2009].
Class D1 soil is most stiff, and class E soil is least stiff.