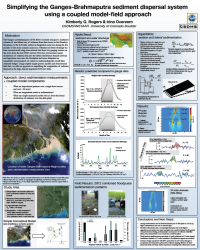 The Ganges-Brahmaputra (G-B) Delta is a densely populated (~900 km-2) delta that could be flooded within the next century by a combination of global sea level rise and increased monsoonal rains. These rivers currently transport a combined estimate of one billion tons of sediment from their basins in the Himalaya Mountains to the delta surface each year during the five months of the Asian summer monsoon. Sediment and water discharge has been reconstructed using observational data from two gauging stations on the Ganges and Brahmaputra Rivers from the mid 1950’s onward. However, downstream spatial distribution of sediment flux into the deltaic distributary channel network and deposition rates onto the floodplain and lower deltaplain are remarkably unconstrained, yet critical to understanding the overall delta sediment budget.

A series of model components are used to simplify the G-B sediment routing system and to test the sensitivity of the system to various climate scenarios. We numerically model daily and monthly incoming sediment flux with the climate-driven hydrological model, HydroTrend, which predicts long-term sediment load as a function of river discharge, drainage basin characteristics and climate controls. The estimated flux provides boundary conditions to the lowland sedimentary input system. We then present a simple approach to sediment routing over the delta distributaries and into tidal channels using two cross-sectional process models, AquaTellUS and FV-SED, to calculate cross-channel sediment accumulation from river flooding and tidal flooding, respectively. Model outputs are validated by field data collected in the fluvial-dominated and tidally-controlled lower delta plains. Direct sedimentation measurements from the river-dominated lower delta show spatially variable patterns of monsoonal overbank deposition, with localized rates as high as 5 cm/yr. In the tidally controlled western lower delta plain, regional mean accumulation rates are around 1 cm/yr, emphasizing the role of the large (3-4 m) tidal range in sediment dispersal. Seasonal sedimentation patterns revealed by these direct field measurements are comparable to rapid near-channel sedimentation indicated in the modeling results. Using this coupled modeling approach, the unknowns in the flood plain and deltaplain storage terms of the G-B sediment budget are simplified.