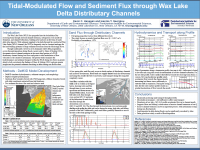 In this study, a Delft3D model of the Wax Lake Delta was developed to simulate flow and sediment flux through delta distributary channels. The model was calibrated using existing measurements of velocity and sediment concentration across channel transects taken during a single flood event. The calibrated model was then used to simulate full spring-neap tidal cycles with several representative upstream boundary conditions, with grain size variation in suspended load represented using two sediment fractions. Flow and sediment flux results through distributary channel cross-sections were examined for spatial and temporal variability with the goal of characterizing delta development processes at the scale of a single bifurcation and along the entire channel network. The Wax Lake Delta has grown through channel extension, mid-channel bar deposition, and channel bifurcation. The formation of stable bifurcations in the delta has controlled the resulting channel network and landscape development. Model results at two particular bifurcations with varying degrees of asymmetry are examined in light of proposed equilibrium conditions. The flow and sediment flux distributions at both bifurcations show variability through the tidal cycle and at different input discharges. Additionally, the trends in flow, velocity, bed shear stress, and sediment transport are examined along primary distributary channels. Here we show that tidal modulation of currents influences suspended sand transport, and ebb-tide acceleration has the capacity to suspend sand in distal reaches during lower flows. The basinward-increasing transport capacity in Wax Lake Delta channels indicates that erosive channel extension could be an important process even during non-flood events. Results of this study show that tidal range and varying flow influence the balance between erosional and depositional delta growth. Modeling of these processes in existing deltas can increase the understanding of dynamics during low-flow portions of the year and their importance in delta development.