Changes in water and sediment exchange between the Changjiang River and Poyang Lake under natural and anthropogenic conditions, China 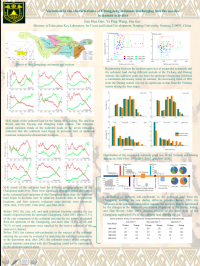