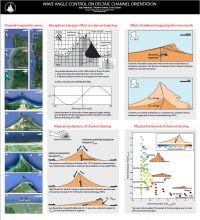 Deltas are fragile coastal ecosystems, sensitive to changes in both marine and terrestrial forcings. Many active deltas face rising sea level, reduced fluvial sediment supply, and a subsiding delta plain, making them increasingly exposed to wave action. In a deltaic system, autogenic feedbacks between the river mouth, alongshore transport of sediment, and differential morphology between the up and downdrift flanks of the delta can deflect the river mouth and steer the course of the river. Previous modeling studies of wave-influenced deltas forced the fluvial channel to grow along a straight, predefined path, leaving these feedbacks unexplored.

We improve upon the plan-view delta Coastline Evolution Model (CEM) by allowing the river mouth to grow in a direction perpendicular to the local shoreline’s orientation. Additionally, a fraction of littoral sediment β can bypass the river mouth. This allows us study the effects of wave climate and sediment bypassing on channel orientation.

We find that for a large fluvial sediment flux the channel will orient itself into the dominant wave approach direction. In this case, shoreline angles on both sides of the river mouth effectively limit sediment bypassing. As fluvial dominance decreases, the channel steers away from the waves. When no littoral sediment is allowed to bypass the river mouth, the ratio between the flux of alongshore littoral sediment (stored in the updrift flank) and the flux of fluvial sediment (stored in the downdrift flank) is reflected by the average channel orientation. This physical framework allows us to further interpret the conditions under which deltas form. Furthermore, these results provide quantitative insight into active deltas under dynamic environmental conditions.