Hydrodynamics and morphological changes of the Wax Lake Delta (WLD) during hurricane Rita, 2005 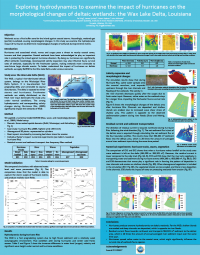 For this study Delft3D HD module, coupled with SWAN and a morphology module is applied to explore the impact of hurricane Rita (2005) on the hydrodynamics and morphological changes of WLD, A vegetation routine is also incorporated to study the influence of plants during this hurricane event. Under normal conditions tides cause water level to change by ~1 m (-0.5 ~ 0.5 m). During hurricane Rita, the storm surge causes water level to rise to as high as 3 m. Water level at the deltaic area first decreases by more than 2 m before the hurricane storm surge approaches while water accumulates towards the center of the hurricane. Current velocity at the deltaic area increases from 0.6 m/s (during tides) to 1.5 m/s (during hurricane Rita), and the storm surge causes water to flow upstream in the river channels, lasting for 12 hours. Simulation results without including a vegetation routine reveal that after hurricane Rita made landfall, the delta morphology changed such that sediments eroded mostly on the deltaic islands and were deposited in the distributary channels. This demonstrates an opposite pattern to former observations made during river floods, indicating that hurricanes decrease the progradation of WLD. A model simulation incorporating aboveground vegetation shows that plants reduce storm surge progradation, and diminish the impact of hurricane Rita on the deltaic area such that the vegetated islands are less eroded. Less sediment is deposited in the distributary channels as well. The impact of plant roots has been explored through stabilizing bed materials, both for cohesive and non-cohesive sediments. Results demonstrate that roots can significantly decrease erosion in vegetated areas and illustrates that vegetation could be a great protector to wetlands, especially during extreme events.