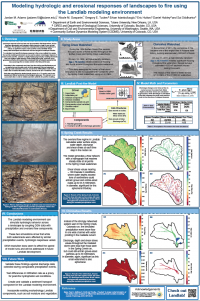 Snowmelt from forested areas is critical to the management of ecosystem services and water resources in the Western U.S. Current land-surface models use relatively simple forest canopy parameterizations that neglect spatial. High-resolution forest canopy information collected using Light Detection and Ranging (LiDAR) has the potential to inform these models and increase the model fidelity of snow-vegetation interactions. In this study, we apply the Noah-MP (multi-parameterization) land-surface model to ask the study question “How does higher resolution parameterizations of forest canopy structure in a land-surface model alter the timing and magnitude of snow-season water and energy fluxes across a variety of Western U.S. mixed-conifer forests?”. To answer this question we developed tree geometry (height and radius), stem density, and canopy cover parameters from LiDAR for a 2 by 2 km area at scales of 1, 0.5, and 0.1 km at four sites: Boulder Creek, CO, Jemez, NM, Kings River, CA, and Wolverton, CA. We ran the Noah-MP model at these scales using the Niwot Ridge, CO Ameriflux forcing to investigate model response to a wet (2011) and dry (2012) year. The model resolution produced noticeable differences in the timing of snowmelt at all sites, with the 0.1 km model having earlier and larger snow ablation due to greater turbulent heat fluxes from model grid cells having little to no forest cover. The higher resolution model also produced greater longwave radiation losses to the atmosphere. Compared to snow water equivalent (SWE) observations near Niwot Ridge, the coarser models (0.5 and 1 km) tended to accumulate too much snowpack and melt snow too rapidly, while the finer resolution model (0.1 km) tended to ablate too much snow mid-winter but captured the timing of peak SWE and snowmelt more robustly. The forest canopies from the four different sites did little to alter the timing of snow accumulation and ablation at the coarser resolutions. Interestingly, the 0.1 km model showed characteristic accumulation and ablation timing at each of the four sites that were consistent with their different forest canopies. Our results suggest that higher resolution Noah-MP model runs resulted in water and energy fluxes that were generally more consistent with a variety of in-situ observations. However, land-surface models may need to adjust their turbulent transfer parameters and/or share information on turbulent heat fluxes between model grid cells in order to fully utilize high resolution forest canopy information.