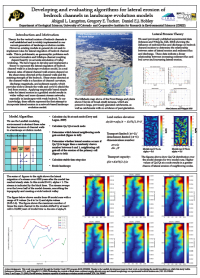 Theory for the vertical incision of bedrock channels is well established and is widely implemented in our current generation of landscape evolution models. However, existing models in general do not seek to implement rules for lateral migration of bedrock channel walls. This is problematic, as geomorphic problems such as terrace formation and hillslope-channel coupling depend heavily on accurate simulation of valley widening. We have begun to develop and implement a theory to represent the lateral migration of bedrock channel walls in a landscape evolution model. In a real channel, rates of lateral channel wall erosion depend on the shear stress directed at the channel walls and the resisting strength of the bedrock. Shear stress directed at the channel walls is a function of channel curvature, discharge magnitude, and sediment supply, which provides tools to abrade the walls and cover to shield the bed from erosion. We used previously published experimental data showing the influence of sediment flux and discharge on bedrock channel incision to determine the amount of lateral erosion based on a relationship between sediment flux and discharge. These data indicate a relationship between increasing sediment flux and bed cover and increasing lateral erosion. We use the Landlab modeling environment to abstract these rules for lateral erosion of channel walls to a landscape evolution model. Our model algorithm calculates total erosion rate at each cell and then partitions that erosion into vertical or lateral erosion. The amount of lateral erosion is calculated using Qs/Qt, the ratio of total sediment flux at a cell to total transport capacity. The vertical erosion is applied to the primary cell, while the lateral erosion component is applied to a neighboring cell chosen at random, allowing the stream network to shift when the elevation in the neighboring cell becomes lower than that of the primary cell. These simple rules for including lateral erosion in a gridded model result in wider valleys and more dynamic stream networks, especially in landscapes with weak bedrock. In particular, the model simulates erosive fluvial valley floors that are more than a grid cell wide, maintains them in the face of continuing landscape uplift, and creates terraces in the landscape in response to varying sediment supply to the channels. To our knowledge, these efforts represent the first attempt to incorporate lateral erosion in a network-based landscape evolution model.