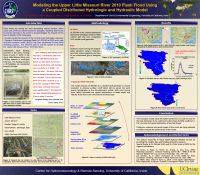 Flash floods are among the most devastating natural hazards, which cause loss of life and severe economic damages. Modeling flash floods to provide warnings to the public to prevent/mitigate the impacts of this type of disaster is still challenging. A coupled model which consists of the currently used Hydrology Laboratory - Research Distributed Hydrologic Model (HL-RDHM) at NWS and a high resolution hydraulic model (BreZo) has been developed for flash flood modeling purposes. The model employs HL-RDHM as a rainfall-runoff generator in coarse resolution to produce surface runoff which will be zoned into point source hydrographs at the sub-catchment outlets. With point source input, BreZo simulates the spatial distributions of water depth and velocity of the flow in the river/channel and flood plain. The model was utilized to investigate the historical flash flood event in the Upper Little Missouri River watershed, Arkansas. This event occurred on June 11th, 2010 and had killed 20 people and caused severe property damages. The catchment was divided into 55 sub-catchments based on Digital Elevation Model (DEM) at 10m resolution from USGS. From HL-RDHM surface runoff, 55 hydrographs can be derived, which then become 55 point sources as input in BreZo. The system was calibrated by tuning the roughness parameter in BreZo to best match the USGS discharge observation at the catchment outlet. The simulation results show the system performed very well not only for the total discharge at the catchment outlet (Nash-Sutcliffe efficiency = 0.91) but also the spatial distribution of the flash floods.