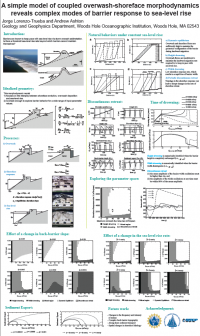 Low-lying coastal barriers face an uncertain future over the next century, with many projections suggesting end-of-century rates of sea-level rise as high as 1 cm/yr. The hazards associated with this passive inundation can be reasonably estimated using state-of-the-art tools. However, the coast is not a bathtub - increased sea levels enhance the ability for waves to reorganize the coast, typically resulting in increased shoreline retreat by moving sediment either offshore into deeper waters or onshore by overwashing the existing coast.

Although many models of coastal change have been developed, the majority are either highly calibrated and intended to operate at the temporal scales of engineering projects (< ~5 years), offering little possibility of forecasting never-seen behaviors such as barrier drowning, or long-term geologic models, which typically assume that the coast maintains an ‘equilibrium’ configuration that moves with sea level. We aim at bridging the gap between these approaches by constructing a simple model that focuses on dynamical coupling of two primary barrier components: the marine domain represented by the active shoreface, which is constantly affected by transport and reworking by waves, and the backbarrier system, where the infrequent process of overwash controls landward mass fluxes. The model demonstrates that coastal barriers can respond to an accelerated sea-level rise in complex, less predictable manners than suggested by existing conceptual and long-term numerical models. Model behaviors under constant sea-level rise reveal two potential modes of barrier failure: ‘height drowning’, which occurs when overwash fluxes are insufficient to maintain the landward migration rate required to keep in pace with sea-level rise; and ‘width drowning’, which occurs when the shoreface response is insufficient to maintain the barrier geometry during landward migration. We also identify a mode of discontinuous barrier retreat, where barriers can experience punctuated intervals of rapid rollover and shoreline stability, even with constant rates of sea-level rise. We explore the sensitivity of these modes to external and internal variables, including sea-level rise rate, maximum overwash rate, shoreface response rate, and inland topography.