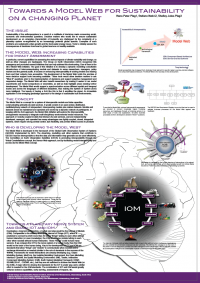 Sustainability of the anthroposphere is a result of a multitude of decisions made concerning social, economic and environmental questions. Decision makers who would like to ensure sustainable development as an emerging characteristic of humanity are challenged by the complexity of a planetary system re-engineered by an increasingly powerful global species. Examples of such problems are sustainable urban growth and the food-water-energy nexus. Tools to reliably assess the consequences of decisions from local to global level are not readily available.

In particular, current capabilities for assessing the various impacts of climate variability and change, as well as other changes are inadequate. The Group on Earth Observation (GEO) recognized this emergency and promoted several initiatives that can help address this shortcoming. One of them is the GEO Model Web initiative. The goal of this initiative is to develop a dynamic modelling consultative infrastructure of intercommunicating models and datasets to serve researchers, managers, policy makers and the general public. It focuses on enhancing interoperability of existing models and making them and their outputs more accessible. The development of the Model Web holds the promise of more decision support tools becoming available. These tools would allow decision makers to ask “What if” questions prior to the implementation of decisions and support adaptive management and responsive design. The Model Web will also benefit researchers by making it easier to run model experiments and model comparisons or ensembles, as well as help highlight areas needing further development. The Model Web would support a synchronization across different spatial and temporal scales and across the languages of different disciplines, thus making the System of System (SoS) more intelligent. The beauty of having a SoS like this is that it amplifies the signal. An immediate application is the emerging geodesign approach to the design of sustainable built environments.

The Model Web is developed in the framework of the Global Earth Observation System of Systems (GEOSS) implemented by GEO. The observing, modelling and other systems that contribute to GEOSS must be interoperable so that the data and information they generate can be used effectively. The Committee on Earth Observation Satellites (CEOS) is promoting interoperability through the Virtual Constellations concept, the Sensor Web approach, and by facilitating model interoperability and access via the Model Web concept.

The Model Web is a concept for a system of interoperable models and data capacities communicating primarily via web services. It would consist of an open-ended, distributed, multidisciplinary network of independent, interoperating models plus related datasets. Models and datasets would be maintained and operated and served by a dynamic network of participants. In keeping with the SoS approach, the Model Web initiative will explore the interoperability arrangements necessary to integrate multi-disciplinary environmental model resources. The approach of loosely coupled models that interact via web services, and are independently developed, managed, and operated has many advantages over tightly coupled, closed, integrated systems, which require strong central control, lack flexibility, and provide limited access to products. Developing a long-term perspective, a logical next step would be the Internet of Models (IOM). Comparable to the already developing Internet of Things (IOT), which is predicted to connect by 2020 more than 50 billion “things” talking to each other without human interaction (or even knowledge), the IOM would have models talking to each other when needed without human interaction. If we compare the IOT to the nerve system of a human body, then the IOM would be the brain of the human being. Key to the development of IOT and IOM are standards that allow “things” and “models” to communicate when needed and to exchange information as needed (similar to the role of standards in the success of the WWW). Frameworks for model interactions are already developing (e.g. Object Modelling System, ModCom, the Invisible Modelling Environment, the Open Modelling Interface: OpenMI, the Spatial Modelling Environment: SME, Tarsier, Interactive Component Modelling System: ICMS, Earth System Modeling Framework: ESMF, SEAMLESS-IF , CSDMS, etc.), but they are not sufficient to achieve the Model Web (or the IOM). A major effort to develop the standards for the IOT is under way, and a similar effort to needed for the IOM standards. The combination of IOT and IOM would greatly enhance science capabilities, early warning, assessments of impacts, etc.