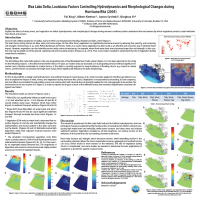 Close to half a billion people live on deltas, many of which are threatened by flooding. Delta flooding also imperils valuable ecological wetlands. In order to protect deltas, it is critical to understand the mechanisms of flooding and evaluate the roles of different forcing factors.

Delft3D, a widely used 3D hydrodynamic and sediment transport model, has been applied to the Wax Lake Delta in Louisiana in order to explore the impacts of wind, waves, and vegetation during extreme conditions. Using wind and pressure field inputs of Hurricane Rita in 2005, the simulation indicates that the deltaic hydrodynamics and morphologic changes are determined by the interactions of all three factors. Wind shows a large impact on water level and velocity, especially in the shallow water zone, where water level increases by ~2 m and water velocity increases by ~1 m/s. Waves, on the other hand, demonstrate almost no effect on water level and velocity, but significantly increase sediment transport due to increasing bed shear stress. Sediment deposition occurs primarily at the coast, when water floods higher elevated land and velocities start to decrease, leading to a significant drop in bed shear stress. Vegetation, a critical factor that influences deltaic hydrodynamics, is represented in the model by adding 2D roughness to the bed. The vegetated wetland and its surrounding area show a notably different pattern in erosion and deposition compared to the unvegetated simulations. The vegetated islands receive significant deposition, while adjacent channels become much more eroded because water is routed through channels when the surrounding vegetated islands are more difficult to erode.

To take into account the impact plant roots have on the soil (increase in soil strength and therefore an effectively reduction in erosion), a new root routine has been added to Delft3D. This routine mimics this process by increasing the soil critical shear stress required to reduce erosion. The modeled results indicate that more deposition appears on the vegetated root area, while more significant erosion simultaneously occurs at those sides of these islands that are facing the ocean. This illustrates that, while vegetation can protect land from erosion, it can also intensify erosion in the surrounding area. Therefore, the use of natural vegetation as a protection against coastal erosion processes requires more research.