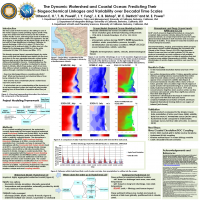 The west coast of North America is the setting for one of the world’s largest coastal upwelling regions. Large rivers drain from North America into the northern eastern Pacific Ocean, delivering large loads of sediments, as well as nutrients, organic matter and organisms. The Eel River discharges into the North Pacific just north of Cape Mendocino in Northern California. Its annual discharge (~200 m3/s) is about 1% that of the Mississippi, but its sediment yield (15 million tons/yr) is the highest for its drainage area (9500 km2) in the entire continental US. This strongly seasonal signal, generated largely by winter storm events that flush sediment and detritus into the river and down to the sea, generates dramatic nutrient pulses that may play a role in the timing and magnitude of offshore phytoplankton blooms. Understanding how the interannual variability of weather, moderated by slower trends in climate, affects these pulses, which in turn may alter offshore nutrient availability, is something we hope to explore through a detailed modeling framework. In our coupled modeling framework, the watershed is currently represented by the lumped empirical watershed model HydroTrend for its ability to generate high-frequency water and sediment time series in relatively unstudied basins. The atmosphere is represented by the NCEP North American Regional Reanalysis, a model and data assimilation tool. Eventually, we hope to represent the atmosphere with the Community Earth System Model, a powerful tool for studying climate change projections, which will let us talk about possible future impacts of climate change on coastal productivity. The ocean is represented with the Regional Ocean Modeling System, a powerful and very modular, physically distributed model that can efficiently solve fine-scale resolution grids. The coastal biology will be handled by modification of an iron-limited nutrient-phytoplankton-zooplankton-detritus model.