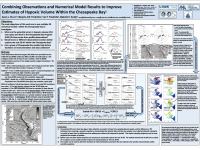 The overall size of the Chesapeake Bay “dead zone” is quantified by the Bay’s hypoxic volume (HV), i.e., the volume of water with dissolved oxygen (DO) less than 2 mg/L. In order to improve estimates of HV, DO was subsampled from the output of three dimensional model hindcasts at times/locations matching the set of 2004-2005 stations monitored by the Chesapeake Bay Program. The resulting station profiles were then input into an interpolation program to produce Bay-wide estimates of HV in a manner consistent with non-synoptic, cruise-based estimates. Interpolations of the same stations sampled synoptically as well as multiple other combinations of station profiles were examined in order to quantify uncertainties associated with interpolating HV from observed profiles. The potential uncertainty in summer HV estimates resulting from profiles being collected over two weeks rather than synoptically, averaged ~5 km^3. This is larger than that due to sampling at discrete stations and interpolating/extrapolating to the entire Bay (2.4 km^3 ). As a result, sampling fewer, selected stations over a shorter time period is likely to reduce uncertainties associated with interpolating HV from observed profiles. A function was also derived, that, when applied to a subset of 13 stations, significantly improved estimates of HV. Finally, multiple metrics for quantifying Bay wide hypoxia were examined, and cumulative hypoxic volume was determined to be particularly useful, as a result of its insensitivity to temporal errors and climate change. A final product of this analysis is a nearly three-decade time series of improved estimates of HV for Chesapeake Bay. (Submitted March 2013 to Journal of Geophysical Research. For a pdf pre-print contact Carl Friedrichs at cfried@vims.edu .)