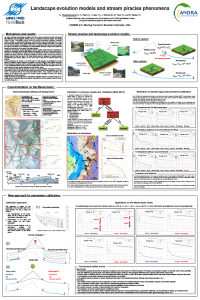 On earth, landscape morphology is mainly controlled by rivers evolutions and their interactions with hillslopes. But hydrographic network may be re-organized by stream capture and modify deeply the relief. This transition may be induced by several mechanisms (diversion, headward erosion, avulsion, or subterranean filling up). It has interested numerous scientists since a long time (Davis 1895, Blache 1943, Lesson-Quinif 2001 & Le Roux-Harmand 1997-2009…). Here we focus on stream piracies by headward erosion, when an actively eroding low level stream (called the captor) encroaches on the drainage of a nearby stream flowing at a higher level (called the diverter) and diverts part of the water of the higher stream. During the last decades, several landscapes evolution models (LEM) have been developed to quantify the topography evolution with diffusion and advection equations. These models play an important role in sharpening our thinking to better understand the interaction between landscape evolution processes. LEM were developed basically to simulate erosion, tectonic and climate at different scales of time and space. But, these models were not designed to describe specific mechanisms as the stream capture. It’s one of the aims of this work to evaluate LEM for this purpose. In this paper, we develop a 1D model based on LEM equations to investigate the stream piracy by headward erosion responses to climatic or tectonic changes. This model incorporates the most common equations used in quantitative geomorphology; diffusion in hillslope, advection in river (detachment-limited mode) and an inequality based on slope and drainage area for the limit between these two domains (Montgomery and Dietrich, 1988). First, simulations on analytical cases highlight the stream head progression mechanism, and the results indicate that this progression rate is mainly controlled by the slope at the captor source. Consequently, the aggradation of the diverter or (and) the incision of the captor accelerate the process. Then, a predictive study with an improved version of GOLEM (software developed by Tucker & Slingerland in 1994) on the Meuse basin shows that several piracies may probably occur in the future. A comparison with the 1D model gives similar results. The simplicity and the flexibility of the 1D model allow complex simulations in the Meuse basin taking into account: lithological differences of outcropping layers, Meuse deposition tendency, etc. Once the 2D simulations or topography analysis locate potential captures, 1D simulation may intensively be used, as it presents many advantages; weak execution time, simple limits conditions setting, less time for data preparation, etc. Consequently, a sensitivity analysis to estimate piracies ages is realized with the developed 1D model.