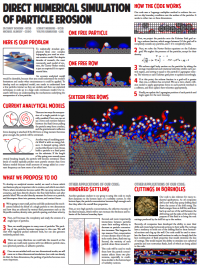 Any code that attempts to simulate large scale geophysical flows and their effect on topography needs a way to couple local flow properties to a rate of sediment erosion or deposition. However, the mechanisms responsible for a particle’s entrainment into a flow are poorly understood. Early erosional models setup a force balance between the fluctuating hydrodynamic forces acting on a particle and the adhesive forces holding a particle to the substrate. Later researchers eschewed this force balance in favor of an energy balance. They claim that a particle is constantly receiving energy from turbulent fluctuations in the flow near the surface, and that a particle will become entrained when it receives a critical amount of energy.

Despite all the work that has gone into deriving an erosion model based on theory, the most popular, and most accurate erosion model used in geophysical codes is the Garcia-Parker model, which is a simple fit to several sets of experimental data. But because their model is empirical, it’s impossible to know under what circumstances the model can and cannot be reasonably applied. A theoretical model would be much more desirable for precisely this reason.

Our goal is to better understand the mechanisms of particle entrainment through the use of direct numerical simulation. We are using a code developed at Lawrence Livermore National Laboratory, which solves the incompressible Navier-Stokes equations and uses a Lagrange multiplier method to enforce the correct boundary condition on the surface of the particles within the computational domain. With this method, we are able to accurately simulate the motion of thousands, or even tens of thousands of particles in an external flow in two or three dimensions. With this code, we can study in detail the coupling between local flow structures and the forces on a particle, which will hopefully lead to a better, theoretically based model for erosion.