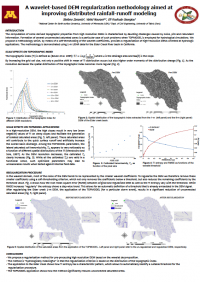 In this study, a methodology based on a multi-resolution wavelet analysis is introduced to extract a regularized topographic index (TI) distribution from a high-resolution DEM (digital elevation model). The methodology is a promising method to deal with common problems in hydrological applications of high-resolution DEMs, which usually contain noise, pits and redundant information. Formation of several unconnected saturated zones is a particular case of such problems when TOPMODEL is employed for simulation of hydrological processes within a basin. The proposed method includes four steps. The first two steps are used for smoothing and de-noising purposes and include decomposition of the original DEM into multi-level sub-signals by 2-dimentional discrete wavelet transform (DWT) and thresholding of the wavelet coefficients. In the next step, the original smoothed and filtered DEM is reconstructed using inverse DWT. Finally, the TI distribution and its information content are computed. The computed information content is used as a metric to identify an optimal TI distribution which contains reasonable topography information in the absence of noise and redundancy. Application of the procedure to 1-m resolution LiDAR (light detection and ranging) DEM of the Elder Creek River watershed via the TOPMODEL framework indicates its filtering ability to smooth and connect the saturated areas during the hydrological process. In addition to the rainfall-runoff modeling, the proposed pre-processing technique may be applied wherever a high-resolution DEM is employed for distributed simulation of hydro-environmental processes.