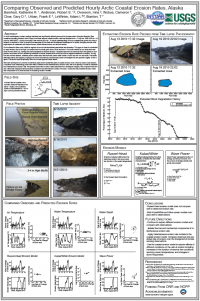 In Arctic landscapes, modern surface warming has significantly altered geomorphic process rates. Along the Beaufort Sea coastline bounding Alaska’s North Slope, the mean annual coastal erosion rate has doubled from ~7 m/yr for 1955-1979 to ~14 m/yr for 2002-2007. Locally the erosion rate reaches 30 m/yr. A robust understanding of the processes that govern the rate of erosion is required in order to predict the response of the coast and its adjacent landscape to a rapidly changing climate, with implications for sediment and carbon fluxes, oilfield infrastructure, and animal habitat.

On the Beaufort Sea coast, bluffs in regions of ice-rich silt-dominated permafrost are abundant. This type of coast is vulnerable to rapid erosion due to its high ice content and the small grain size of bluff sediment. The bluff material at our study site near Drew Point is 64% ice, making the bluff susceptible to thermal erosion. Liberated sediment is removed from the system in suspension and does not form sheltering beaches or barrier islands which would provide a negative feedback to erosion. During the sea ice-free season, relatively warm waters abut the bluff and ocean water melts a notch into the 4-m tall bluffs. The bluffs ultimately fail by the toppling of polygonal blocks bounded by mechanically weak ice-wedges that are spaced roughly 10-20 m apart. The blocks then temporarily armor the coast against further attack.

We document the style and the drivers of coastal erosion in this region through simultaneous measurements of the oceanic and atmospheric conditions, and time-lapse imagery. We extract proxies for erosion rate from time-lapse imagery of both a degrading block and a retreating bluff from the summer of 2010, and compare the proxy record with environmental conditions and melt rate models. These observations verify that the dominant process by which erosion occurs is thermal insertion of a notch, toppling of blocks, and subsequent melting of the ice in the block. The annual retreat rate is governed by the length of the sea ice-free season, water and air temperatures, and the water level history, including both storm surge and wave height.

Motivated by these observations, we developed a numerical model to capture the evolution of the permafrost bluffs on the North Slope. We honor the high ice content of the bluff materials and the role of the toppled block in temporarily armoring the coast. We employ a positive degree day algorithm to drive subaerial melt, and a modified iceberg melting algorithm to determine rate of notch incision. Our model is first applied to the 2010 coastal retreat history, and is then used to address field and remote sensing observations over a variety of timescales. Finally, we employ the model to explore expected changes in coastal retreat rates in a range of climate scenarios that include increases in the duration of sea-ice free conditions, warming ocean temperatures, and changes in storm frequencies.