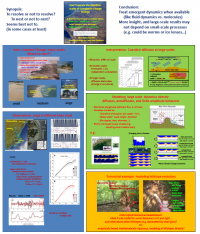 Analyzing patterns of shoreline change between repeated LIDAR surveys reveals disparate styles of behavior on different temporal and spatial scales (Lazarus and Murray, GRL 2007; Lazarus, Ashton, Murray, Tebbens, and Burroughs, in review). We use wavelet analysis to investigate the mean variance (or spectral power) of cross-shore shoreline change, as well as the alongshore locations exhibiting high variance, across a range of scales. The time spans between surveys range from one to 12 years. On scales of a kilometer and less, the variance of shoreline change does not increase with the length of time between surveys. On these spatial scales, significant changes in shoreline location tend to occur in localized zones, and these zones shift from one time period to another rather than accumulating. Incidentally, the variance across these scales also exhibits a power-law behavior, even though different processes are known to dominate shoreline change on different scales within the range from 10-103 m. However, on scales larger than a kilometer, a peak in the variance appears, and both the magnitude of the variance and the alongshore scale of maximum variance increases over time; on these scales of a few to ten kilometers, shoreline changes do accumulate.

We interpret these observations as follows: On scales of a kilometer and less, each wave event creates an alongshore-heterogeneous pattern of shoreline change, with the alongshore locations of accentuated shoreline change depending on the characteristics of the waves (height, period, deep-water approach angle) and how those waves interact with heterogeneities on the seafloor—bathymetric features on the inner continental shelf are associated with shoreline change on the kilometer scale (List REFSXXX), and those in the surf zone and swash zones produce changes with alongshore scales on the order of one hundred meters and ten meters, respectively . Repeating such shoreline changes over many wave events superimposes essentially independent patterns of change, with effectively no memory of previous changes. The cumulative changes on scales of a few to ten kilometers, in contrast, suggest a diffusion of plan-view coastline shape; the relationship between the length scales of the variance peak over different time scales are consistent with diffusion, given estimates of effective diffusivity for this coastline (REF ANDREW, JORDAN). Apparently, on large alongshore length scales, the residual alongshore sediment flux that emerges from the many disparate wave events and associated complicated smaller scale patterns of sediment transport can be treated as related to shoreline orientation (the gradient in shoreline location)—the way that a long-term, large-scale, gradient-related flux of soil creep on hillslopes emerges from the complicated smaller-scale patterns of tree throw, gopher burrows, etc.