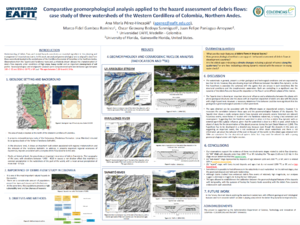 The watershed of the Tapartó and Farallones rivers and the La Arboleda stream in the central zone of Colombia’s western mountain range are known to have experienced important debris flow events historically. In the same manner, there is geomorphological evidence that suggests a complex dynamic associated with the conditions of high slope, heavy rainfall and a soil profile with an important development.
The geomorphological analysis carried out in these watersheds enabled recognition of different levels of deposits in addition to their stratigraphic characterization. Likewise, radiocarbon dating allowed the establishment of ages between 100 +/- 30 and 2010 +/- 30 years for the different levels of deposits characterized. The integration of geomorphological and stratigraphic information along with radiocarbon dating allowed for the differentiation of the debris flow dynamics of each of the basins and suggests the existence of three phases. The first is an ancient one (with deposits older than 2000 years), followed by a sub-recent dynamic (represented by levels between 1500 and 2000 years old) and a current dynamic, with low incised deposits systems and ages that do not exceed 500 years. Finally, it was established that even though these basins have great potential for the generation of debris flow events of significant magnitude, the deposits show a tendency of decreasing magnitudes in the last 1000 years.
These analyses and their results are input to the construction of knowledge in relation to the understanding of this phenomenon in tropical environments and the generation of elements that would allow to address the problem in other zones with similar characteristics in throughout the country.