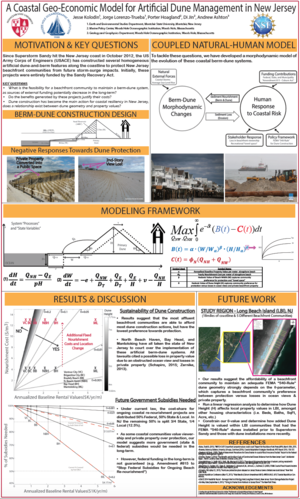 After Superstorm Sandy impacted the New Jersey coastline in 2012, the state’s primary coastal resiliency plan was to fortify the entire shoreline by constructing large-scale berm-dune systems along the beach. These large artificial dunes, funded entirely by Congress, were constructed with the goal of mitigating future storm damage to houses and infrastructure. Two long-term management questions are 1) is it feasible for a beachfront community to maintain these projects over the long term?; and 2) if not, what fraction of the cost would need to be subsidized? To tackle these questions, we use a “geo-economic” model that captures the natural processes of beach and dune erosion and migration via storm overwash coupled with engineering interventions of beach nourishment and dune construction. The economic portion of the model accounts for the relationship between property values and berm-dune geometry. Previous work suggests that due to their protective and recreational value, higher dunes and wider beaches increase that property values. However, it is unclear whether this relationship holds true for dune protection some years after a storm has occurred as lags in major storm events may lead to perceptions of lower risks. Thus, beachfront communities may place greater value upon viewership and private property, rather than on protection by artificial dunes. By deriving mathematical expressions for optimal berm and dune size as a function of geologic and economic parameters, our model suggests that changes in risk perception can lower property values and therefore reduce the ability of a community to keep up with the costs of maintaining these structures. We are currently testing this hypothesis by analyzing past and present LiDAR imagery (i.e. 2010, 2014, and 2018) and real-estate data from Long Beach Island, NJ.