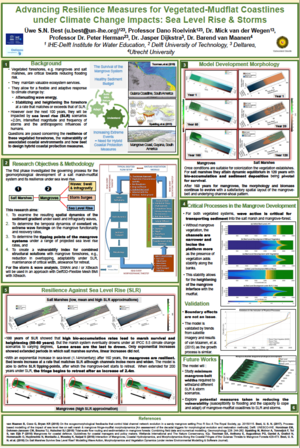 This study aims to fundamentally assess the impact of sea level rise (SLR) on vegetated, muddy coastlines. This includes an assessment of the resilience of coupled salt marsh-mudflat and mangrove fringe-mudflat coastlines under different sea level rise scenarios.

Traditionally, the design of coastal protection measures revolved around the use of hard structures to ensure a certain level of design safety against flooding of the coastal hinterland. However, with the effects of climate change: sea level rise, increased intensities and frequencies of storms; these solutions appear to be unsustainable. Building-with-Nature strategies have reinforced the value of vegetated foreshores, as being capable of allowing for a flexible and adaptive response to climate change. They attenuate wave energy, stabilize and may heighten the foreshore at a rate that matches that of sea level rise. Important parameters related to the resilience of vegetated foreshores to sea level rise are site specific and include sediment supply, wave climate, tidal range, sea level rise rates, type of vegetation cover, vegetation dynamics and topography.

Process-based numerical modelling tools are critical towards enhancing the understanding of the processes governing the morphological development of vegetated-mudflat systems. Limited studies have quantified the impact of sea level rise on the resilience of these intertidal systems with a key focus on determining the tipping points and the governing processes for bio-geomorphological development. Therefore, we applied an open-source 2D process-based model (Delft3D) that couples intertidal flow, wave-action, sediment transport, morphodynamic development with the vegetation dynamics for temporal and spatial growth and decay of vegetation and bio-accumulation.

The vegetation growth model was developed using MATLAB, which was then coupled with a depth averaged Delft3D model. For the salt marsh species, the growth model was based on that of a population dynamics approach whereas the mangrove growth model was based on a windows of opportunity approach. The model setup was inspired by conditions within the Dutch South Western Scheldt and the Guyana coastline for the salt marshes and mangroves respectively. The numerical model and the coupling approach were validated quantitatively against existing theory, data and laboratory studies; after which the system’s resilience against sea level rise was examined. Spatial equilibrium of the marsh-mudflat system was attained within 120 years with wave action and sediment dynamics being key triggers. The mangrove fringe-mudflat model however attains equilibrium on longer timescales. The subsequent imposition of a 100 year period of rising sea-level (1.1m) in salt marsh-mudflat systems revealed the biomass accumulation as a critical determinant for the drowning rate. Though, initially highly resilient against the exponential increase of sea level rise, the marsh system starts to drown as channels incise the platform after 50-60 years. This corroborates recent studies which predict a decline in the carbon sequestration potential of salt marshes within the North Sea. Contrastingly, the mangrove fringe-mudflat system proved resilient after a 100 year period of extreme SLR and the increases in drag gained from their extensive mangrove root network and the below ground biomass accumulation proved to be the main drivers. However, after 150 years, there is a shift in the nature of the system as it starts to drown. Results show survival for both systems in sediment rich areas. Overall, the model can be applied to assess the vulnerability and resilience of vegetated coastal areas impacted by sea-level-rise worldwide. Thereby, proving to be a useful tool for developing countries where data is scare. Both the Delft3D software and MATLAB tools used in this study are open source and freely available online: https://oss.deltares.nl/web/delft3d. The running of the model requires the use of MATLAB versions 2013 or higher. This software can be attained through purchase, student version or trial online: https://nl.mathworks.com/products/matlab.html. With regards to the hardware required, a standard PC with minimum 8GB RAM. Additionally, the MATLAB source code will be made available via the Environmental Modelling and Software Journal (ESM) once published.