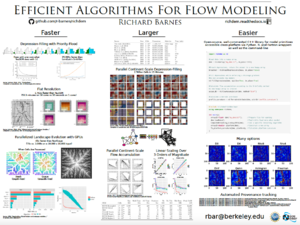 To answer geomorphological questions at unprecedented spatial and temporal scales, we need to (a) parse terabyte-scale datasets (DEMs), (b) perform millions of model realizations to pinpoint the parameters which govern landscape evolution, and (c) do so with statistical rigor, which may require thousands of additional realizations.

A core set of operations underpin many geomorphic models. These include determination of terrain attributes such as slope and curvature; flow routing; depression flooding and breaching; flat resolution; and flow accumulation.

Here, I present new, best-in-class algorithms which perform the foregoing. I explain how they are implemented in a high-performance, open source C++ library called RichDEM which is accessible to general practitioners via Python. This design is novel among terrain analysis software and I argue that it is necessary for moving the field forward in a way which allows for rapid scientific development and practitioner adoption.