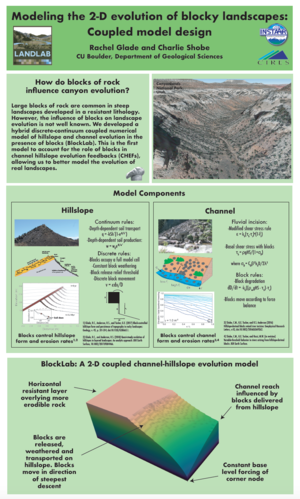 Large blocks of rock are common in steep landscapes developed in the presence of a resistant lithology. However, the influence of blocks on landscape evolution is not well known. We developed a hybrid discrete-continuum coupled numerical model of hillslope and channel evolution in the presence of blocks (BlockLab). The model consists of a horizontal resistant layer of rock overlying softer, more erodible rock. A channel reach, driven by an external base level forcing, incises through the middle of the domain and provides the base level for the hillslopes. The hillslope model uses a continuum approach to treat depth-dependent production and transport of soil. Retreat of the resistant layer, however, is treated discretely. A relief threshold determines release of discrete blocks from the resistant layer onto the hillslope, where each model cell is either filled with blocks or contains no blocks. These blocks are allowed to weather at a constant rate, and are tracked as they move downslope according to a relief threshold related to their diameter. Once blocks enter the channel, they influence channel evolution by covering the bed and reducing available bed shear stress. A force balance on in-channel blocks determines whether they can move downstream. Blocks in the channel are reduced in size by abrasion according to the shear stresses exerted on them. The presence of blocks affects channel incision rates, in turn influencing evolution of the hillslopes. This is the first model to account for the role of blocks in channel hillslope evolution feedbacks (CHEFs), allowing us to better model the evolution of real landscapes.