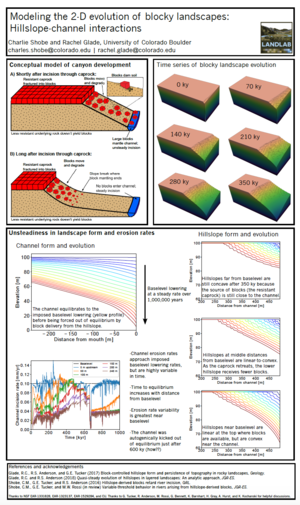 Block-mantled hillslopes responding to river incision deliver large blocks of rock to channels. These blocks inhibit fluvial erosion by shielding the bed and reducing available bed shear stress. Block delivery by hillslopes in response to channel incision therefore feeds back on the boundary conditions felt by the hillslopes: larger numbers of blocks, or larger blocks, reduce the rate at which the hillslope boundary condition is lowering. This coupled set of feedbacks can lead to oscillatory behavior in both channels and hillslopes with periods of rapid channel incision interspersed with intervals of little to no incision. For a hillslope with a line supply of blocks (such as might originate from a resistant caprock overlying a less resistant layer), we expect that these feedbacks are strong only when the source of blocks is relatively close to the channel. Once the block source has retreated sufficiently far from the channel, blocks will weather away before reaching the channel and the oscillatory channel-hillslope feedbacks described above will cease. Our questions are 1) For how long after initial river incision through a caprock do oscillatory channel-hillslope feedbacks persist? and 2) How far must the block source retreat from the channel before such feedbacks become negligible?

We use the new BlockLab 2-D landscape evolution model to assess the spatial and temporal extent of oscillatory channel-hillslope feedbacks. We model a channel incising a lithological sequence consisting of a weak layer underlying a resistant caprock. Blocks from the caprock are delivered to the channel and inhibit river incision. We find that at early time, temporal variation in the erosion rate boundary condition felt by the hillslope is significant. As the resistant layer retreats further from the channel, variations in both the channel erosion rate and the resistant layer retreat rate decline. The rate of these reductions in variability with time is set by competition between 1) the ability of the hillslope to deliver multiple large blocks to the channel (a function of initial block size, block weathering rate, and the distance the blocks had to travel before arriving at the channel), and 2) the ability of the channel to overcome the erosion-inhibiting effects of blocks (set by fluvial discharge and the block erodibility coefficient). We find that after enough model time has passed, the resistant layer has retreated far enough from the channel that block effects on the channel are negligible and oscillatory channel-hillslope feedbacks no longer exist. This distance is primarily a function of initial block size and block weathering rate. Our results indicate that channel and hillslope evolution rates in block-mantled landscapes may be highly unsteady, depending on the strength of coupling between the channels and hillslopes.