The How and Why of Carbonate Heterogeneity

Some simple but (possibly) important questions, to start from the beginning:

Scales and types of heterogeneity are important, from heterogeneity in platform architecture, to geobodies, to facies, to porosity. -- I'm testing this feature out (EKF - 11/10/08)

I was at a faculty luncheon the other day and sat next to a gent from biology. I asked what the most pressing question was in his field. He responded 'Why things occur where they do.' This sounds familiar. To understand and to be able to predict heterogeneity seems a challenge in many fields.

OK...to start, I suppose we should define heterogeneity. Evan makes note that (whatever it is) heterogeneity occurs at several scales. Before we measure it, or try to predict 'it,' what is 'it'?

We could give some functional definition: 'geologic/reservoir property variability that influences fluid flow' for example, or 'differentiation between adjacent rock/sediment types that makes them distinct from neighbors' or something like that. Is this definition scale-independent, or not?

Some analyses of remote sensing data, for example, define classes based on the spectral response of the substrate.

What do you think?

I like 'differentiation between adjacent rock/sediment types that makes them measurably distinct from neighbours'. Measurements could be lots of different things I guess, from colour to chemical composition to faunal content. It seems fairly scale-independent to me in that you could apply essentially the same idea at a mm scale or a km scale given appropriate data - so it must all be fractal, right :-)

Actually, this used to drive my mathematician father in law nuts - scale independence alone, without relevant structural similarities being presented as fractal he claimed was not very useful. But I digress.

I think we have a reasonable definition of heterogeneity (unless others disagree?) so shall we move on to the why?

Heterogeneity in date format, and spelling (neighbours, colour), as well.

In terms of carbonates, I wonder if the only place we would expect to see homogeneous deposits would be in deep ocean basins, with sediments just settling from suspension? Otherwise, variations in energy, nutrients, light, temporal evolution, 'history' (e.g., what happened at time t-1) and so on would be expected to play a role in producing heterogeneous sediments. This heterogeneity could be from variations in in situ sediment production, selective transport into or out of an area, preservation bias, or, as they become rocks the heartbreak of diagenesis.

I guess a challenge would be then to meaningfully ascertain the variables that could influence deposits, and any possible interactions, then use those insights to build testable numerical models.

I agree that it is the challenge, But check out this model result. 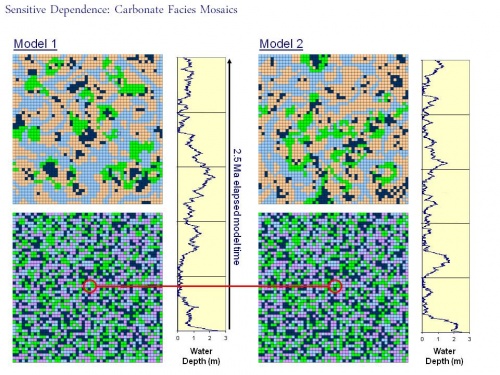 The image shows output from two runs of my carbonate cellular automata. The two models start off with the same random distribution of three facies in map view (lower images) differing only in one cell in the 50x50 grid, highlighted by the read circles. The upper map shows how the facies have evolved after 2.5 My of elapsed model time - the CA rules create clustering reducing facies heterogeneity compared to the original facies distribution, but maintaining a more or less complex pattern of interacting facies blobs. Most importantly the outcomes are different, showing divergence due to the presence of the one initially different facies code in the middle of the grid. Note also the water depth history from the models central point; divergence in water depth hisotry between the two models is clear, as are the lovely unforced oscillations in water depth due to variations in sediment production as the facies mosaic evolves.

So, I wonder, does this model tell us anything useful about the variables that influence carbonate systems and how they interact, and is it in any way testable? I have some opinions on this, as you might guess, but I'd like to hear your thoughts first ...